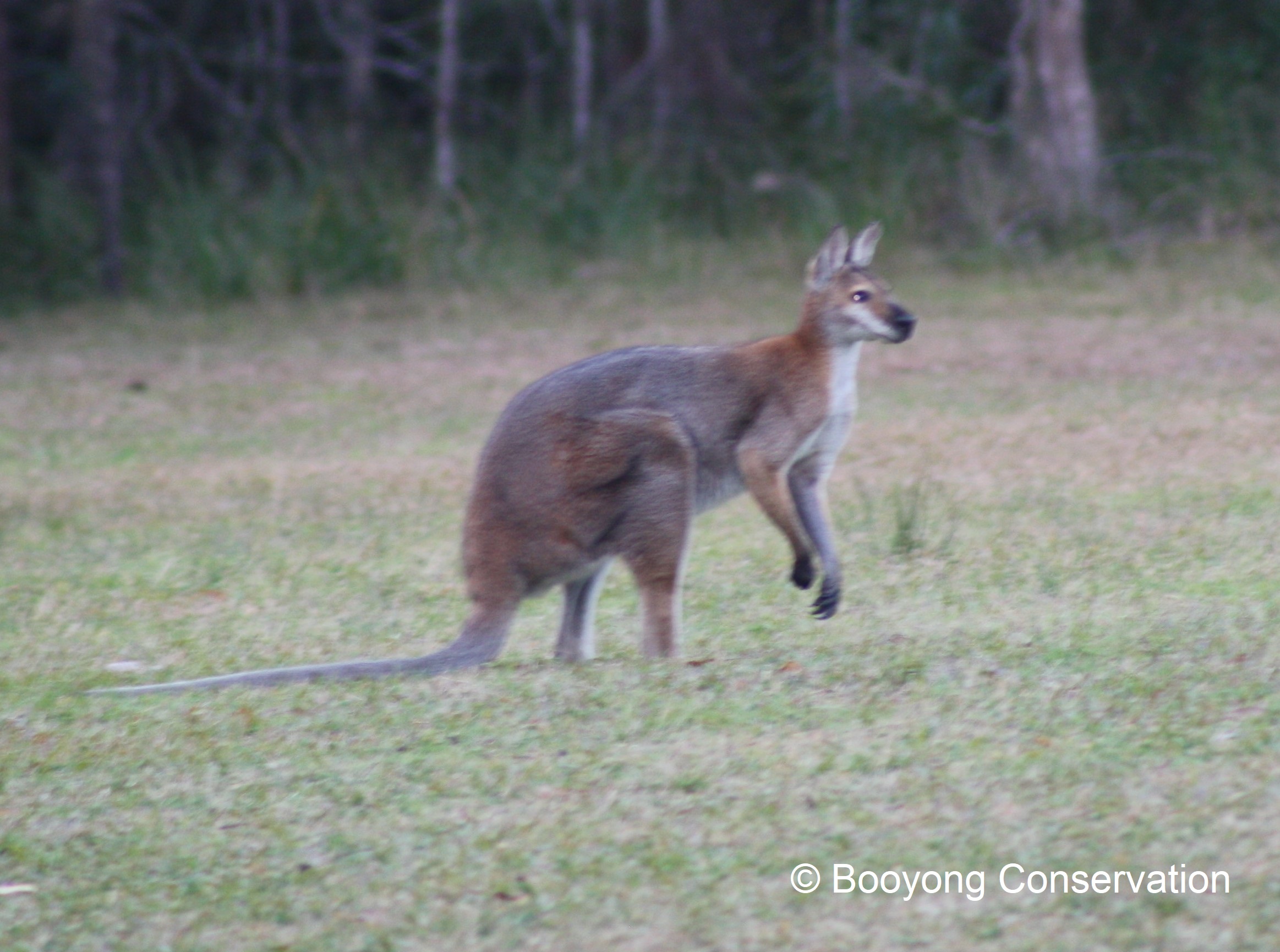 Late in the afternoon and early morning at Booyong, it’s not uncommon to see a Red Necked Wallaby emerge from the rainforest to feed on the herbs and grasses. (We like to call the Wabbalies)

Similarly, to kangaroos’ wallabies are marsupials and their joeys (young) are raised in their pouch. They drink their mother’s milk and will emerge after a few months. We recently saw a joey pop back into his mother’s pouch when we came out on the deck, so cute! It has been very difficult to get a picture of these guys as they stay hiding in the bush all day and it’s often quite late in the day when we see them.

Wallabies are herbivores, mostly eating grass and they can eat leaves, plants, herbs and fruits. They have long and powerful tails that are used for balance and strong back legs which are used for fighting other males. They are easily distinguished by their distinctive colour and as they are often smaller than kangaroos and can often be found alone. Their colour allows them to camouflage beautifully in the Aussie bush.

The wallaby featured in this photo is a red necked wallaby (Macropus rufogriseus) It is protected by law in all states of Australia. The pouch life for a Red-necked Wallaby joey is about 9 months, with the joey continuing to suckle till it is around 12-15 months of age. They can live for up to 15 years old.

According to Bush Heritage the name wallaby is derived from the Eora Aboriginal people of coastal NSW. There are approximately 30 species and they are often named after their habitat, such as rock wallaby or swamp wallaby. They feature in many Aboriginal stories and they provided fur and were a source of protein for the Aboriginal people.

Many wallaby species are threatened or endangered. They have few natural predators (dingoes and wedge tailed eagles) but are largely endangered by feral cats, dogs and foxes.  Being herbivores, they also need to compete with introduced species like rabbits, sheep, goats and cattle for food. Under the IUCN Red List of Threatened Species, the Black Forest Wallaby is Critically Endangered; the Proserpine Rock-wallaby is Endangered; the Yellow-footed Rock-wallaby is Near Threatened; and the mala (Rufous Hare Wallaby or Warrup) and Bridled Nail-tail Wallaby are Vulnerable to extinction.

They are also threatened by land clearing and loss of habitation, it’s a pleasure to provide them with a safe haven at Booyong even if they like to eat our plants!