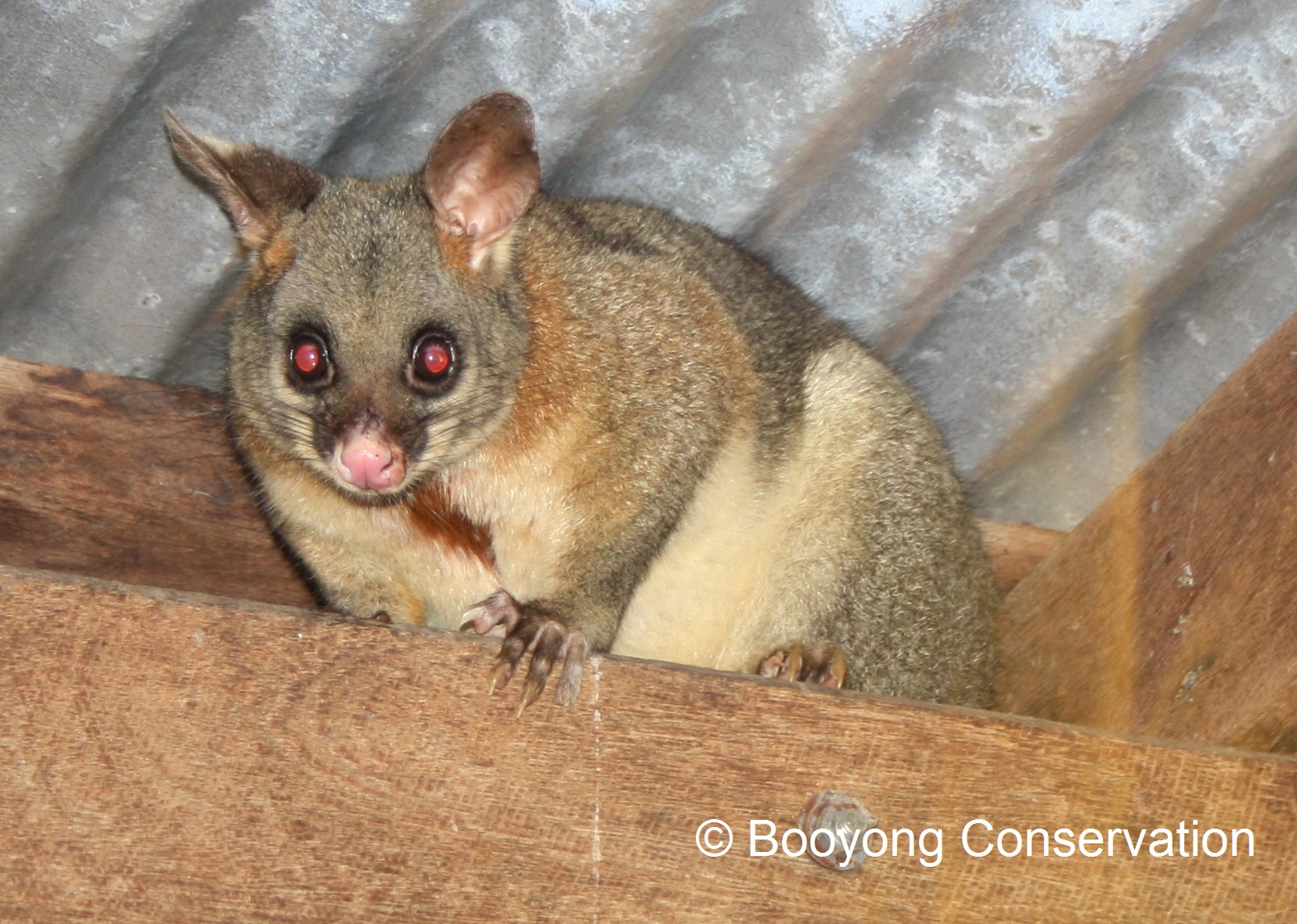 The common brushtail possum is Australia’s most familiar marsupial, with large round eyes, a bushy tail and pointy ears.

The brushtail possum is nocturnal, sleeping during the day and feeding at night. They are well adapted to suburban areas and commonly found in home roofs. If you hear some scratching against the tin roof at night it could be our resident possum. Bob our gatekeeper has taken to feeding him cut up fruit on the deck near the stairs. When you come to stay you may want to do the same, and if you’re lucky you may see him! He generally surfaces around 8-8:30pm.

If you have one in your ceiling at home, you may want to visit – How do I get a possum out of my roof? as there is guidelines and regulations to protect them. They must be released and dusk and near something they can climb otherwise it will not survive. It is recommended to make friends with them in urban areas as when one claims its territory, others will stay away. Just ensure they sleep in a tree and not your roof!

It is Australia’s largest arboreal (tree-dwelling) marsupial and herbivore (plant-eater), feeding mainly feed on new growth leaves of trees and shrubs, herbs, grasses and at Booyong they also enjoy roses and garden plants. The Office of Environment and Heritage suggest boiling a litre of water with a handful of hot chillies, garlic and vinegar and spraying the cooled liquid on plants. We have potted some lovely climbing roses we discovered in the garden bed and each time they grow the possums eat them, so frustrating! This has been incredibly successful at Booyong and our roses are now flourishing on the deck!

They live in trees and are well adapted to climbing, with sharp claws and a back foot for grasping along with a strong and flexible tail for curling around branches. The adult can weigh 1.5-4kg and their length is 25-40cm. They also feed on mistletoe which is a good thing as mistletoe can kill gum trees.

Possums communicate by sound and scent and breed throughout the year, birthing mainly between March and November. Females reach sexual maturity of approximately one year and males in their second and they gestate in just 17 days and grow in pouch for approximately five months after.

An interesting fact is possums  introduction to New Zealand in 1837. They were introduced to establish a fur trade, and have become one of the country’s greatest threats to their natural environment. Unlike in Australia were we have native predators and less palatable vegetation possums thrive. The NZ department of conservation permit hunting/shooting, trapping and poisoning as the main methods of control for possums and there is a great demand for their fur in Japanese markets. We discovered this on a trip to New Zealand when we discovered the girls go shooting on Saturday night to make some pocket money, at the time they were getting $25 a possum – heartbreaking!