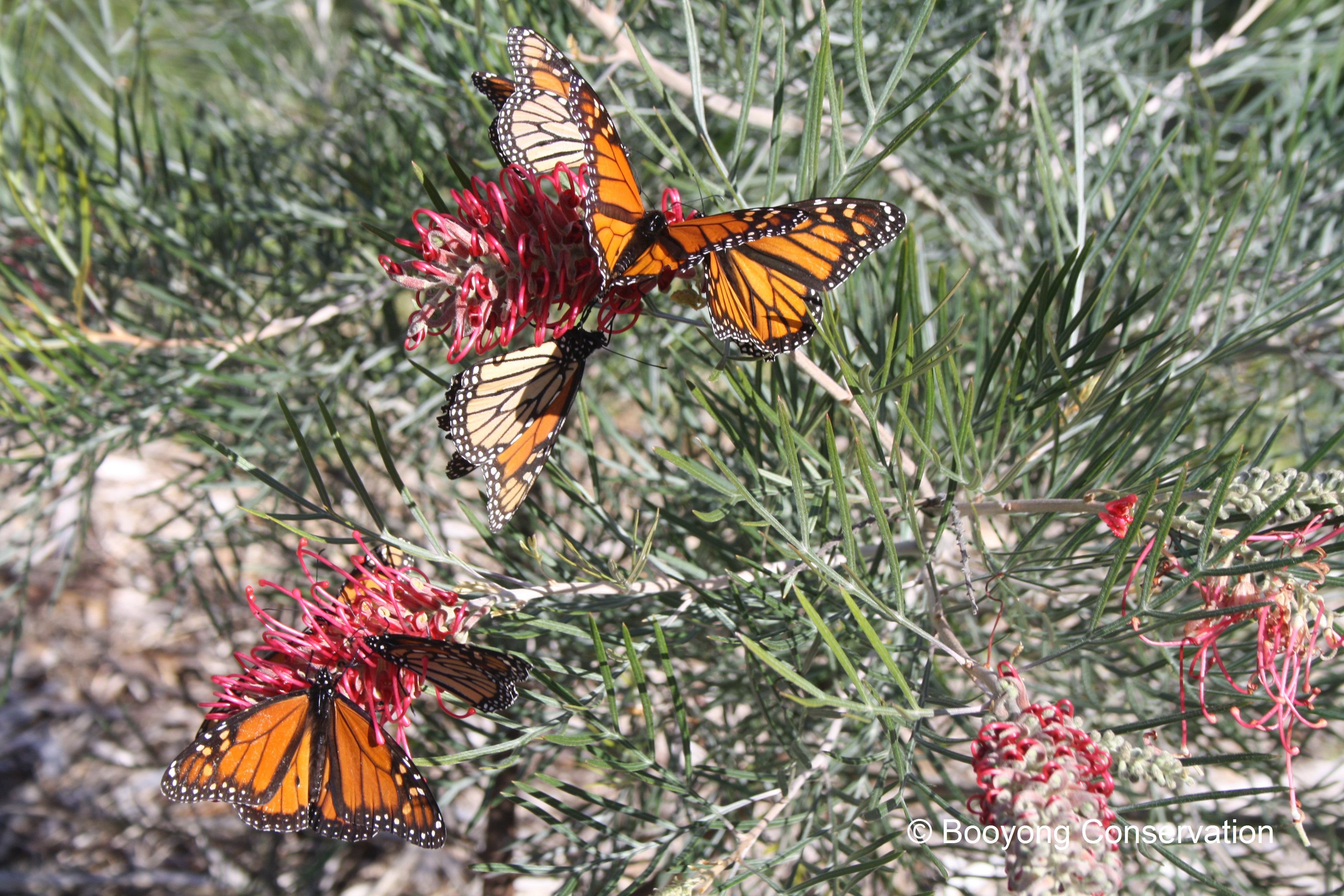 We were amazed last week when we discovered our Grevillea Lollypops covered in beautiful Monarch Butterflies. We planted a variety of grevilleas and natives in the garden bed in front of the cabin last spring with the intention of creating some colour and attracting small birds into the garden. The Grevillea Lollypops was chosen because it produces deep raspberry pink flowers all year round and grows approximately 1.5m in height and width which will still permit the stunning view of the dam from the cabin deck. We were hoping to attract nectar feeding birds and we have recently seen a variety of small birds enjoying the sweet nectar early in the morning before the butterflies appear.

The Grevillea Lollypops (Grevillea banksii x nana) is hardy and like many natives is drought and frost tolerant and enjoys full sun and well-drained soil. Maintenance is low and we will prune it once a year after flowering to maintain its thickness and shape. We may also fertile with a slow release native fertilizer and will remove shoots below the graft to maintain the plants integrity. We planted a variety of natives last spring and lost a few due to the extreme temperatures of summer, it brings me allot of happiness to see the Lollypops has flourished.

These masses of beautiful Monarch butterflies have been amazing to watch and unexpectedly delightful in the middle of winter when the flora and fauna at Booyong seem to slow down.

If you would like to welcome butterflies into your garden, firstly be sure not to spray pesticides as these kill the caterpillars. You need to also provide resources for the butterflies at every stage of their life cycle. Butterflies like open, sunny gardens where they can find shelter from winds and plenty of nectar-rich flowers like the grevillea lollypop.

Whilst caterpillars are sometimes considered pests by gardeners, butterflies are valuable pollinators and links to the food chain and are beautiful to watch. They especially love flowers that are long and tubular as they have a long coiled tongue that is perfect for sucking the nectar from deep within the flower. The nectar of the flower provides them with energy and sustenance.

The monarch butterfly is found in Eastern and southern Australia and was first sighted in Sydney in 1871, is native to North America. It’s also commonly known as a the Wanderer butterfly. Butterflies and need two types of plants –nectar sources and host plants. The lay their eggs on underneath a host plant which for the Monarch is commonly milkweed (Narrow leaf Cotton Bush) which is plentiful at Booyong. They obtain toxins from the milkweed which makes them poisonous to predators however some birds like the Pied Currawaong and Black faced Cuckoo-shrike have been seen successfully feeding on them. Mistletoes are also great spots for butterfly egg laying and food sources for many of our native butterflies.

The butterfly has a wing span of 7-9cm and is identified by its orange and brown colour and black and white spotted band along the edge of its wings. According to The Australian Museum they are strong fliers and have been recorded to reach speeds of up to 40km per hour. Non breeding adult butterflies gather together in cooler areas and apparently used the same trees each year during over-wintering (we’ll certainly let you know if this is the case at Booyong next year). After a week the females arrive and the butterflies disperse after mating. After two weeks of feeding the Monarch butterfly lays eggs which hatch approximately three weeks later. The lifespan of the butterfly is 4-6 weeks.