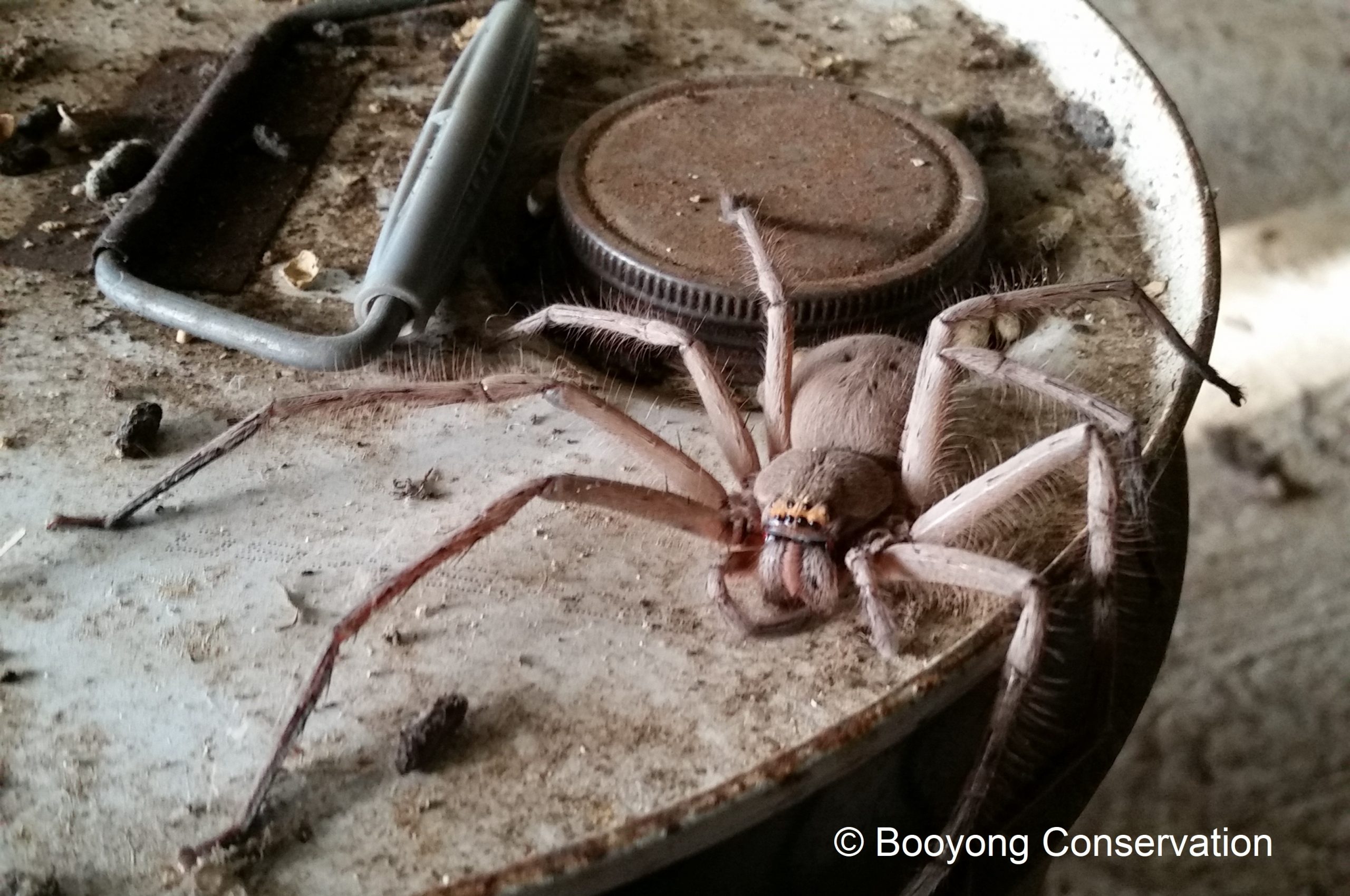 Scientific Name: The Huntsman spider belongs to the Sparassidae Family and there are approximately 95 known species of 1207 types of Huntsman spiders found only in Australia. Common names include the Tarantula or Giant Crab Spider.

What does it look like? The Huntsman’s body lengths can be 2 cm (female), 1.6 cm (male) and its leg span can reach up to 15 cm. I’d have to say Harry comes close to that!

Where does it live? At Booyong Brett discovered this spider when he was tidying up the garden shed, in between two old doors. They are commonly found under tree bark or in a tree trunk and under rocks in the garden.

Unlike many other spider species, the huntsman will not build a web and instead forages for their food, mainly at night. These spiders are fast!

In Sydney, we’ve seen Huntsman spiders occasionally in our home or running along the windscreen of the car if parked in a leafy suburb. They will also often live in the palm fronds of our garden. I recall when we first moved to the hills, I called my brother to come and remove one from the ceiling, I was terrified. Since that time, I have become less afraid and Brett has always been comfortable with spiders. He didn’t even mind Harry crawling up his arm!

Feeding: They eat other invertebrates and are carnivorous and insectivorous (eating insects) and for this reason are considered by many to be a positive addition to the garden. Not Humans – Lol! However, if bitten – A cold pack may relieve local pain and seek medical attention if symptoms like pain, inflammation, headaches and vomiting persist.

Breeding: According to The Australian Museum, the female Huntsman lays up to 200 eggs. She then places the egg sac under bark or a rock, and stands guard over it, without eating, for about three weeks. During this period the female can be quite aggressive and will rear up in a defensive display if provoked. Incubation periods vary and are probably influenced by climatic conditions and once they are born, the mother stays with them for several weeks.

Lifespan – The lifespan of most Huntsman species two years or more.

Breeding behaviours – Male and female Huntsman spiders have a lengthy courtship, which involves mutual caresses, with the male drumming his palps on the trunk of a tree. He then inserts his palps into the female to fertilise her eggs. The male is rarely attacked, unlike some other species, and in fact many huntsman spiders live peacefully together in large colonies. A silken retreat is often built for egg laying, as well as for moulting.

Predators: Predators of Huntsman Spiders include birds and geckoes, Spider Wasps, nematode worms, and egg parasites (wasps and flies). They don’t have great eyesight but can detect large predators approaching.