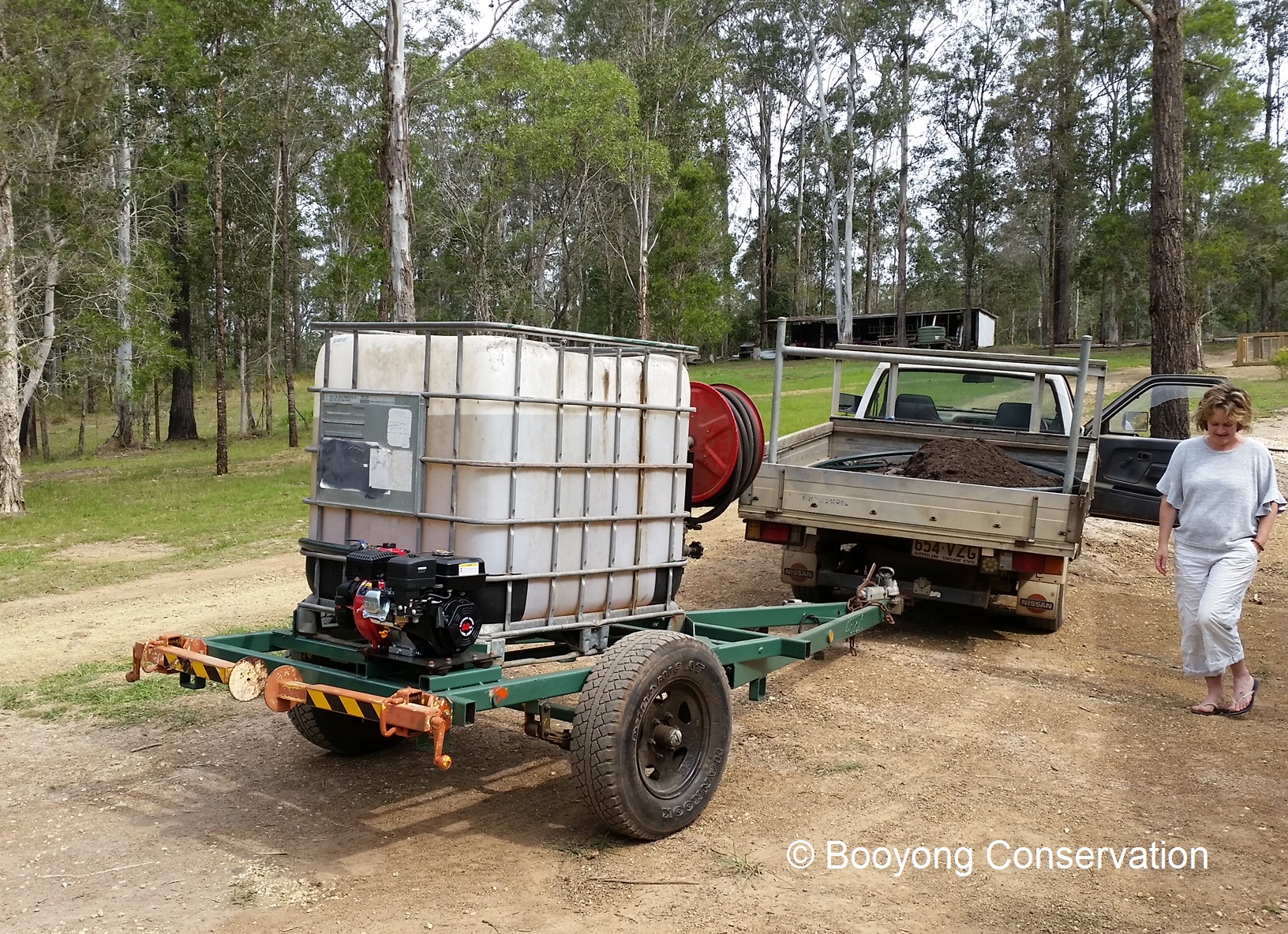 So we decided a while ago to build a fire fighting unit after an incident we had at Booyong!

Not long after we acquired the property a friend was helping us mow the lawn on the zero turn mower, when he noticed a grass fire had begun (the mower blades sparking on hidden fencing wire). It was a hot summers day with moderate winds. As we were still in the process of tidying booyong the grass was dry, brown and long so the fire spread rapidly. We had nothing but 3 flat spades to whack out the fire until the local fire brigade arrived. Fortunately they were quick to respond to our call. Although we did get it under control, it was only by Bob’s fast thinking with the spades and luck with the wind that we got it out so quickly. It could have been disastrous and we immediately realised the importance of fire fighting equipment and a safe plan.

We have since installed three fire fighting pumps and hoses fed from two seperate dams which will protect the house ,shed and shack. The need for portable of water is also important so we were inspired by our friend Brian at the local fire brigade and decided to build a fire fighting trailer. They can be purchased ready made for around the $2500 which is still a great investment but I decided to build one as it gave me a chance to use the welder and spend some time in the shed. You can’t have too many projects, right!

So with some google help we realised the common setup is a 1000 litre water pod mounted on a box type trailer with a petrol pump and hose. Fairly simple ,however the challenge is the weight. 1 thousand kilos of water, plus a pump and fire hose, not to mention the miscellaneous equipment you need stored (Safety gear, tool boxes, spades, hoses etc) adds up. So your average 6×4 box trailer won’t cut it.

After lots of searching I found an ex Coates hire tool trailer on Grays online. It just so happened to be located at Port Macquarie which is nice and local, so I didn’t hesitate and scored it for $400. What made this trailer ideal is it’s construction. It’s rated at 1500 kgs with brakes, long draw bar, swivel tow ball hitch, stabiliser bars and 6 stud wheels with big tyres, perfect for the fire pod! It was unregistered so we had to get an approval from the RTA to tow it home, then the fun began.

Firstly, I took all the A frame sheet metal off, sanded and grinded the chassis. I then sat the pod on for a dummy fit and we filled it with water to work out how well it was weighted, marked the pods position and removed it again. I made brackets from angle iron and welded them into place for the pod to bolt

to and made the fire hose pole from some RHS steel tubing and welded a mounting plate to it. We used a steel plate on rubber mounts for the pump which was bought from eBay (it’s a 8 hp 2 stage Chinese unit). We have used the same type for 12 months on one of the dams with no problems so it seems to be good value for money. If we have any issues with it in the future, it will be replaced with a Honda/Davy pump. Lastly everything was rust converted, primed, painted and mounted, and a few poly pipe fittings were bought and plumbed in for a final test run . It works great !

I’m yet to mount up the toolbox on the draw bar and will hang some whacker spades off the pods frame but that’s about it. We finished it for a tad under $1000 which is pretty good value.

Although it’s primary purpose is in the event of an emergency we are also currently using it for watering some of our newly planted native shrubs that are hard to reach with a hose. It will also be handy next winter when we burn off paddock and large piles of fallen trees, so over all well worth the effort!