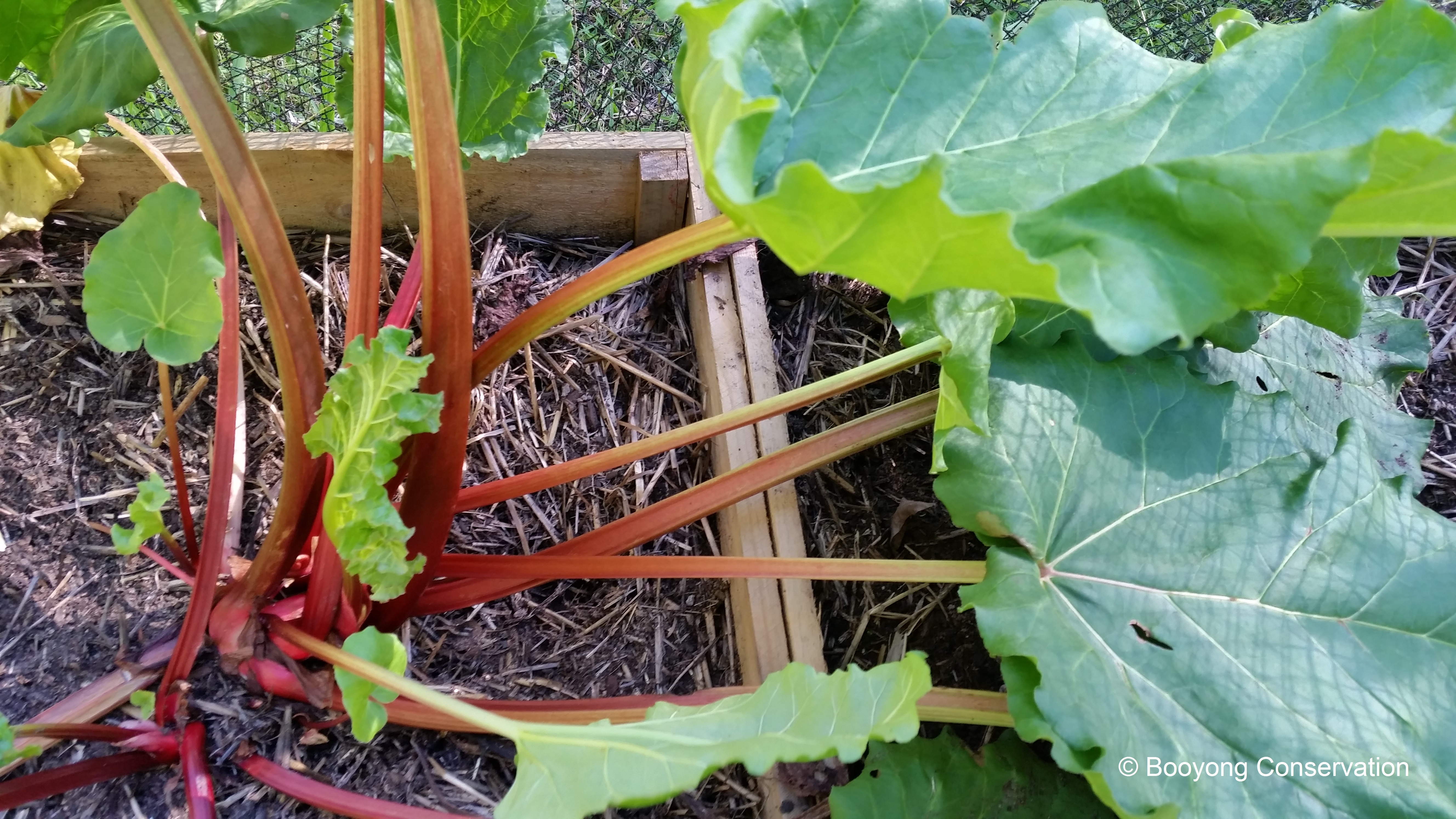 One of the staples in our Food forest is the Rhubarb plant which grows back year after year. They are quite easy to grow, loaded with antioxidants, vitamin C, calcium and are high in fibre.

Growing – The stalk of the rhubarb can be either red or green and it looks a little like celery. Stems are just pulled off and Rhubarb is ready to harvest in spring and early summer when it’s nice and firm with a lovely shiny stalk. Two to three plants are generally enough for a family of four. Due to it being a perennial and coming  back year after year make sure where you plant it is where you intend for it to stay, having said that you can move it when you divide the plant into sets. The plant prefers a temperate climate and needs a couple of good frosts in winter.

Care – If the plant goes to seed this can be an indication that the plant is under stress.

Rhubarb likes to be well nourished with regular feeds of cow and chicken manure in spring and autumn to help it hold moisture in the soil. It likes full sun and should be mulched well in summer and manure or compost should be added to the soil after planting. It can also be fertilized in spring with blood and bone and a sprinkling of potash.

The leaves and roots of the rhubarb plant are poisonous (can lead to kidney damage) for both humans and animals so don’t eat them or feed them to the chooks or bunnies.

Propagation – Don’t let Rhubarb go to seed and if any stems go to flower cut them off as the plant will put all of its energy into the seed and not the stem. We left one to go to seed just to see what happens, however will not try to grow them from seed as it is apparently quite difficult and just as easy to divide the plant.

Every 3-4 years after the plant has become dormant and the leaves have died down in winter months, the plant can be divided with a spade. The roots are yellow, fleshy, quite large and soft and very easily separated (a great gift for friends). New sets are planted 90cm apart with the main bud showing just above the surface of the soil. When replanting the crown should not be buried as it can easily rot when wet.  It’s best not to harvest the plant during the first year of growing to enable it to become well established.

Eating – The stems are often stewed to make jam or relish. Jack and Brett

like to eat them raw off the plant and we stewed some this morning with apple to have on our porridge. Another family favourite is rhubarb and apple crumble. Stephanie Alexander also has a wonderful recipe for a rhubarb and almond crumble tart and we also love this almond and rhubarb cake featured at Floating kitchen. PIP Australian permaculture magazine also featured a pink fizzy rhubarb champagne which sounds delicious!

So many lovely recipe options.

Our lovely neighbour in Sydney shared this Rhubarb Relish recipe with us, it’s so tasty!

Rinse and clean rhubarb. Cut in smaller pieces. Peel the onions and slice into wedges. Place all ingredients in a saucepan. Cook until jam like consistency.

Another recipe I recently acquired on Facebook from Katie

For every 1 kilo of chopped Rhubarb I add 1 cup of castor sugar, juice of one large lemon, a tablespoon of Cinnamon. Give it all a good stir coating all your chopped pieces.

Heat on the stove and the more you stir the more it will break down. It is ready for 25g jam setter if you wish, cool it down a little and place in warm sterilized jars. Lovely added to pancakes, ice creams, and yoghurts yogurts.

An alternative to stewing Rhubarb is to place wet Rhubarb in in a non-metal baking dish, cover it with foil bake and bake until it’s nearly soft. Remove foil, drizzle with honey and dot with butter cooking until soft and slightly browned.