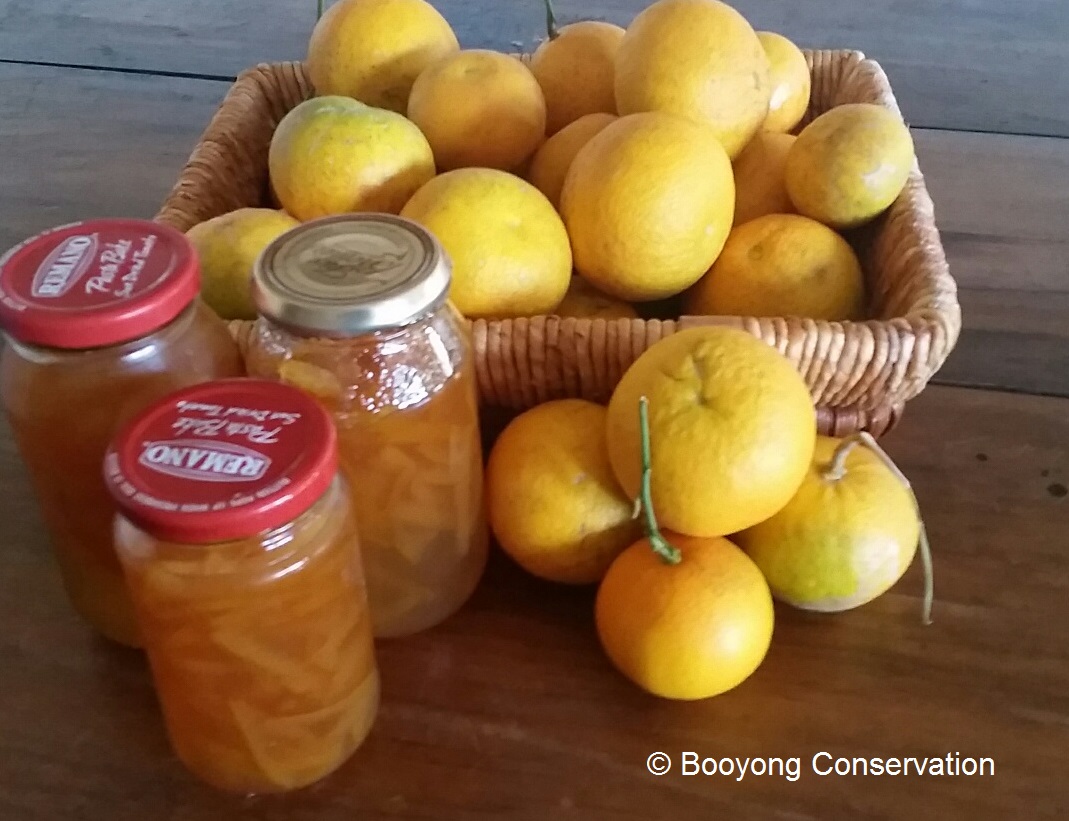 The Seville orange tree is an existing fruit tree and the sour orange is used for cooking jams and marmalades and used as a substitute for lemons in marinades. Another use is for the juice is in cocktails and with roast duck in the traditional French meal duck a l’orange. They are not for eating fresh like oranges and have a sharp bitter taste and many seeds.

At Booyong, we’ve found the fruit ripens in June which is great as the orchard is otherwise looking quite sparse in winter with many of the trees losing their leaves. To care for our tree as recommended by ABC gardening we feed it with fertilizer in July, November and March.

Like many shallow rooted citrus trees, the Seville orange doesn’t like anything growing around it. Jackie French’s guide to Companion Planting recommends using chickens or geese around them to add the high nitrogen fertilizer they need. They also assist with keeping the pests at bay.

This week we made Saville Orange Marmalade using a recipe in The Preserving Book by Lynda Brown which I used often for making produce from the garden. I’ll be sure to leave it on the shelf in the cabin and we have a variety of empty jars in the gardening shed for use if you’d like to give the recipe a go during your stay!

I found the gas cooker on the BQQ more effective for reaching the setting temperature, however my friend Jenny also suggested placing it in the centre of the largest hotplate which also makes sense. Let us know how you go!

Citrus dried is often also used as kindling for the fire, so keep your peels next winter.

It takes 2-3 hours to make and you get three to four average sized jars for this recipe.

Cut the oranges in half and squeeze out the juice, place in a jug in the fridge.

Scoop out the excess mush from skin with a spoon and place in compost also. Slice the softened peel into thin strands.

Add skins and jarred juice from fridge to saucepan with water and add the sugar. Heat gently, stirring until sugar has dissolved. Turn the heat up high, bring to a rapid boil for 5-15 minutes. This will triple in size when boiled so make sure you have a very large pot!

Skim the surface for any scum (I had very little from our oranges) and leave the marmalade to settle for a few minutes. Ladle into warm sterilized jars, cover with baking paper and seal.

To sterilize jars put 4 tbsp of water in a clean jar and microwave for 2 minutes (Do not place metal in the microwave). Drain upside down on clean surface.

The marmalade keeps for 12 months. Keep in a cool dark place and refrigerate after opening.