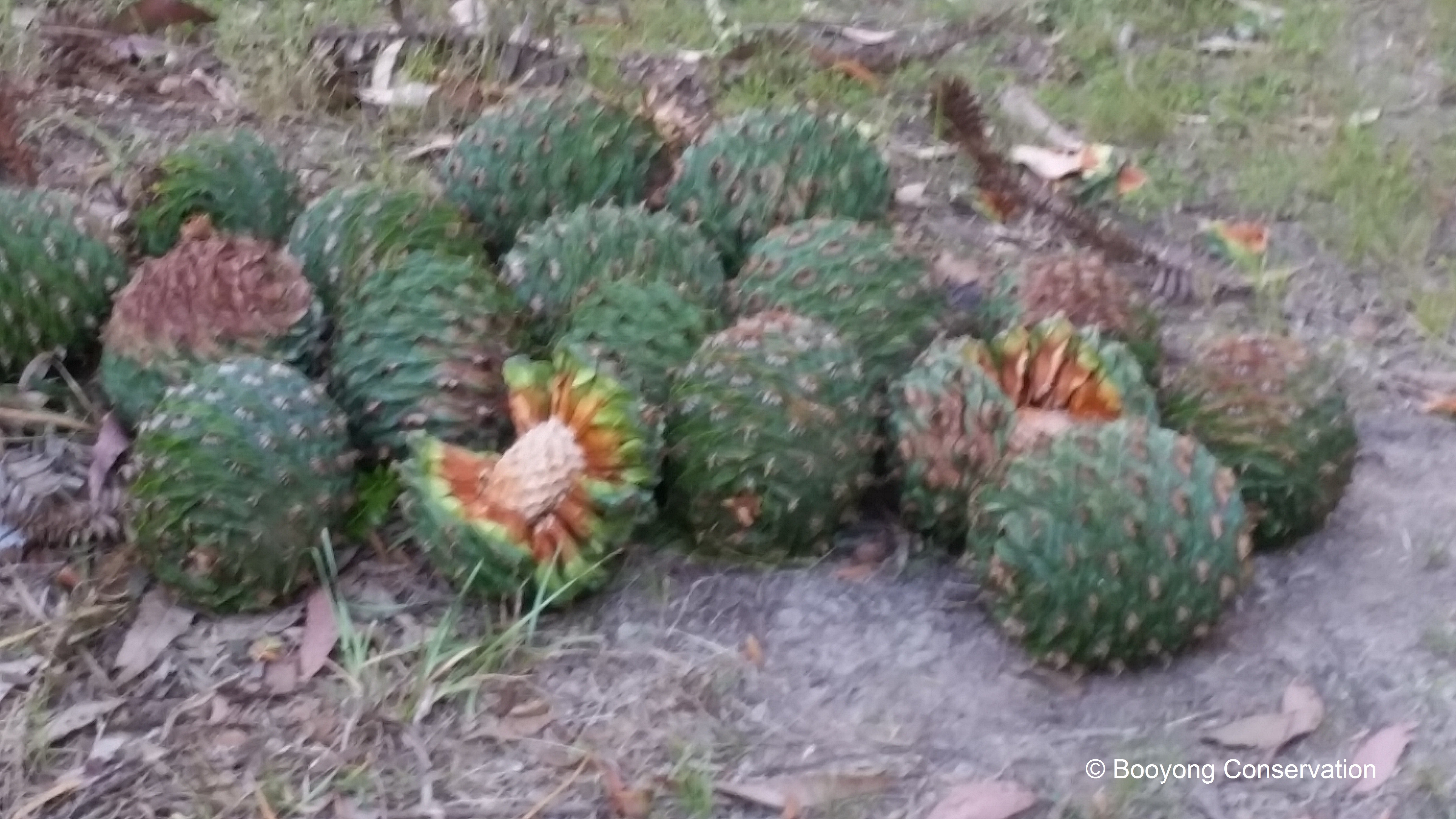 When we first met the original owners of Booyong we were advised to beware of the Bunya nut tree – “Don’t park your car under it”, they said. We suggest visitors follow this advice too.

We’ve noticed three Bunya Nut (Araucaria Bidwillii) trees on the property so far, two by the house and one up in the old kiwi fruit farm. They are of a majestic height and can reach 30-45m (a long way for a heavy nut to fall) and can live for 500 years.

The large green bunya cones are found in the canopy of the tree and this is where the sulphur crested cockatoos rip the cones apart and the bush rat and brush tail possums climb to eat them. The branches grow to the side and fall of and start to brown when they get too long. They are curved shaped which allows the Bunya nuts to roll off them, they almost stick to the spiky branches like Velcro. The leaves are spiky and can hurt – just ask our gatekeeper Bob who insisted on pruning them shoeless.

Bunya nuts were traditionally food for the Australian Aboriginal people and found in a small area of rainforest in South-east QLD and in the Bunya Mountains National Park which is considered sacred by the Aboriginal people. Some tribes wouldn’t camp amongst the trees and for some the tree was never to be cut.

The Bunya Nut tree produces fruit every 2-3 years between December and March and apparently a mature cone can weigh between 5-10kg and contain 30 -100 nuts. This year we have several, please let us know if you would like to try one, just send us a message and we can organise for you to pop in and pick one up or we can take a few home to Sydney.  The Bunya nut we found at Booyong last week weighed 3.7kg’s and contained 72 nuts. We brought them home to the city and had intended to make pesto with some basil from the garden however many of them were hollow and unable to use, perhaps due to the small weight of the nut and immaturity of the tree. Each nut is encased in individual pieces of fibrous material that needs to be taken off and you are then left with a nut in a shell and has a spiky point on the end.

The nuts can be boiled for an hour to remove the shell or roasted for half an hour and then cracked with a hammer. They can also be eaten raw or roasted and it is recommended that you process them within a week from falling to avoid sprouting. They can be kept in the fridge or frozen in their shell and even milled to make a flour.

At Happyearth  they recommend roasting them on a fire and letting them pop after a few minutes or roasting them on a bbq grill. That sounds amazing and if we’re lucky enough to find another one soon we’ll have to give it a go. They also recommend boiling them and blending them with honey over toast – yum!!!

It has been suggested they are similar to a chestnut and the nutritional content of the bunya nut is: 40% water, 40% complex carbohydrates, 9% protein, 2% fat, 0.2% potassium, 0.06% magnesium. The Bunya nut is gluten free.

If you’re lucky enough to discover one during your stay, please feel free to take it home and explore some culinary delights of your own!